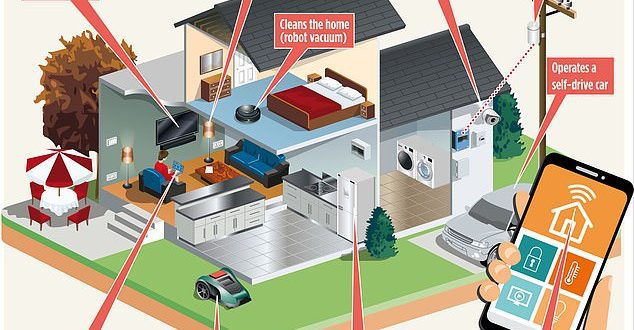 For better and for worse, our lives have been revolutionised by the internet. But a new high-tech innovation known as 5G is set to transform everything once again.

The internet plays a pivotal role in our lives thanks to broadband piped through our homes. But ‘fifth generation’ 5G will take this a giant step forward.

It will enable mobile phones to use wireless broadband that matches the best fibre optic speeds. We will be able to rip out old phone lines and internet cables that clutter the house – and instead use mobile reception for all our needs. 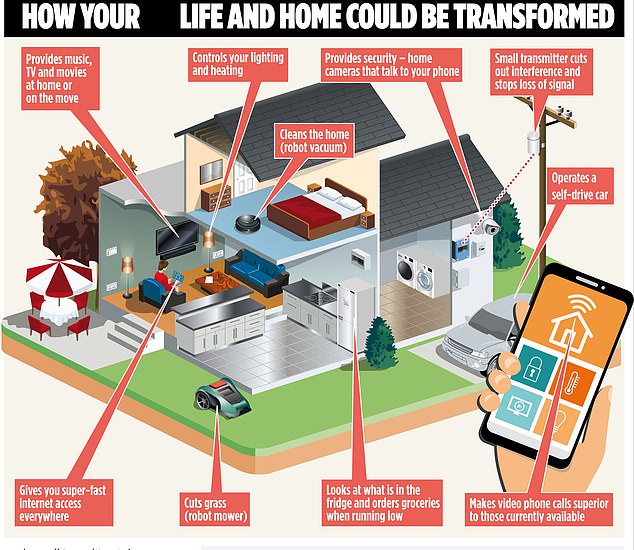 Experts believe 5G will lead to an explosion of new ‘smart’ gadgets that talk to our mobile phones through more reliable superfast signals – offering everything from fridge cameras that order groceries when the contents are running low, to robot chauffeurs that can take us around in a self-driving car.

The possibilities of this connection of gadgets – known as ‘the internet of things’ – seem almost limitless.

The 5G technology will start by making pin-sharp video phone calls the norm so we can ditch our landlines, if we haven’t already.

And with broadband download speeds of perhaps 200 Megabits per second (Mbps) – which is more than four times faster than the current average home broadband speed – the technology will also help us economise, clean the home and be more secure.

Smartphone apps controlled by 5G will monitor our heating and lights – turning gadgets off when not needed – while providing 24-hour security with cameras viewed from our phones.

They will also run robotic vacuum cleaners and lawn-mowers when we are away on holiday.

But 5G is not without its critics. Last week, the Government came under fire when it announced Chinese firm Huawei would be allowed to be a major player in the building of the UK 5G network.

Experts fear it could allow Chinese spies to eavesdrop on private conversations and install ‘a Trojan horse’ – holding communication networks to ransom with the threat of a cyber war.

Ernest Doku, a technology expert at comparison website uSwitch, says: ‘5G has the potential to transform the way we live – but at this stage it is no silver bullet as we still need to ensure everyone has access to the connection before it can change the world.

‘Last year, it started to be rolled out in major cities such as London, Edinburgh, Cardiff and Belfast – though connectivity is still small and patchy. And you need an expensive new smartphone such as the £800 Samsung Galaxy S10 to gain access.

‘So far Apple devices cannot connect to the 5G network and the revolution cannot begin in earnest until they do – which may happen when the latest iPhone models come out in September.’

Download speeds are at least ten times faster with 5G than on the previous best 4G technology – far better than most people’s home broadband and in line with top fibre optic speeds.

It means not only lightning fast access to the internet but the ability to download music and movies much quicker. Downloading a feature film on 4G can take a quarter of an hour – but with 5G it might take just 90 seconds.

BUT WATCH OUT FOR STINGRAYS!

New 5G technology offers an exciting opportunity to improve our networks – but it also opens a new door for fraudsters.

One of the key concerns is the threat of so-called ‘stingrays’. This is where a criminal intercepts your mobile signal with a copycat aerial that tricks it into sharing encrypted identifying data about the phone.

Using this information, the fraudster knows what handset you are using, can track your exact whereabouts and might even be able to hack into your phone operating system’s software.

If this is achieved it might be possible to break into your apps that control and monitor 5G ‘smart’ gadgets. By cracking such codes criminals can eavesdrop on phone conversations and even spy on what you get up to from security cameras you place around the home. Harvesting information that can be seen when you tap into a mobile phone could also enable a fraudster to steal identities, using your personal information to go on an online spending spree or using personal details to empty your bank account.

Cyber security expert Colin Tankard, of Digital Pathways, says: ‘The public needs to be aware of the dangers of this new technology – and with more gadgets being hooked up to 5G it increases the risk of problems if you should get hacked.’

Tankard believes those that embrace 5G must ensure they add a layer of security to their smartphones by downloading ‘virtual private network’ software on to their handsets via an app. Such free software is available from security specialists such as Avira, Symantec and Sophos. Decrypting your phone signals to spy on private conversations is one of the key concerns of the critics of the Chinese 5G manufacturer Huawei. The Government is adamant that it has addressed such security issues by only allowing it to have a maximum 35 per cent stake in any projects – with sensitive areas such as military bases and nuclear facilities strictly off limits.

But this has not stopped the National Cyber Security Centre – the cyber war combat arm of the Government’s intelligence service – from voicing concern. The NCSC has listed Huawei as a ‘high-risk’ firm for security.

NCSC technical director Dr Ian Levy says: ‘The level of security in our networks needs to improve as our reliance on them increases. The threat for UK operators ranges from hostile states to organised crime and petty fraudsters.’

There are just a handful of main providers of the technology that supply 5G to customers of mobile networks such as EE, Vodafone and O2. These include Finnish phone giant Nokia, Swedish company Ericsson, South Korean firm Samsung and Chinese part-state run ZTE. But the most controversial is Huawei.

Last week, it was licensed to have up to a 35 per cent market share in 5G projects – supplying masts, antennae and cables. But it was banned from participating in 5G provision for military bases and nuclear plants.

The mobile market leader in 5G is EE. Even though 5G reception at the moment is almost non-existent outside cities (though EE claims it is available in 50 UK locations), signing up to the new technology is not cheap.

You pay £54 a month to EE for its best-selling Samsung Galaxy S10 5G deal – which includes 10GB of data a month, enough for 500 hours of internet browsing. You then pay a further £30 upfront for the device and must sign up for two years. Vodafone has slightly less 5G nationwide coverage and costs £56 a month with £49 upfront for the same phone and 5GB of data each month if you sign up for two years.

Another company that recently joined the fledgling 5G party is O2. It charges £54.64 a month plus an upfront £30 for a Galaxy S10 5G phone and 15GB of data usage a month – but only if you are willing to sign up for at least 36 months.

If you are using your phone in an area with no 5G reception then the mobile automatically reverts to the previous fastest-speed service 4G – or goes on to 3G or 2G if this reception is not available either.

THE way the technology works is by using a new radio bandwidth that allows more information to be packed into a broadcast than previously possible. But it also requires older 4G masts to be adapted so they can send and receive data on the new wavelength.

The 5G technology will also require small transmitters to be positioned on streets outside people’s homes to ensure ‘smart’ devices in the home can be connected with no interference or loss of signal.

Such building work will cost many millions of pounds and because it is still in the early stages, the ‘smart’ gadgets that can use it are not widespread.

Although we might expect 5G to become more popular this year – so far it has a geographical coverage of less than 5 per cent – it could take a decade before devices other than mobile phones catch up with this super-fast broadband wireless technology.

Doku says: ‘Although it may be exciting to be among the first people to embrace this new technology, prices for 5G phones and access to the 5G network should fall if you hold on for at least 12 months.

‘Also, as a newbie, you may initially be disappointed as national coverage is still poor and the number of gadgets connecting to 5G is limited.

‘But the potential for 5G to transform the way we live and manage our homes is really exciting.’