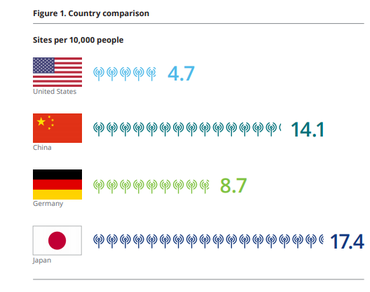 China is far outpacing the US in 5G infrastructure investments — to the tune of $24 billion since 2015 — and the US is at risk of never catching up, according to a new report from Deloitte.

The report, titled, “5G – The chance to lead for a decade,” shows that in addition to outspending the US in wireless communication infrastructure investments, China is deploying technologies more efficiently and quickly achieving higher levels of tower density.

As a result of all this, the US risks ceding its tech leadership position to China, Deloitte concludes — particularly because of the disproportionate economic benefits that come with early tech adoption.

“The potential economic benefits of 5G will soon become a key differentiator for cities looking to attract both businesses and residents,” Deloitte principal Dan Littmann said in a statement. “For the U.S. to remain competitive and eventually emerge as a leader, the race to 5G should be carefully evaluated and swift actions should be taken.”

Despite the economic gains that are widely expected to come from 5G, investing in network infrastructure isn’t always an obvious choice for carriers, the report points out.

“The ongoing pattern of steep declines in what customers pay per MB of mobile data makes the new investment needed for 5G difficult for many carriers to support,” the report says. “However, customers’ ability to access more and more data for the same or lower price is a potential boon to other industries and the national economy.”

Deloitte considers a range of actions that could address this challenge including light-touch regulatory frameworks, collaboration between carriers and other organizations, and the establishment of a national communications infrastructure database.

In the meantime, Deloitte says, China and other countries are “creating a 5G tsunami.”

China’s five-year economic investment plan projects a total of $400 billion in 5G related investment. Compounding the impact of that investment, Deloitte estimates that the equipment necessary to add a carrier in China is about 35 percent less than the US.

In 2017, U.S. tower companies and carriers added fewer sites in the last three years than China added in three months. China now has approximately 1.9 wireless million sites, Deloitte says — 10 times more than the US. On a per capita basis, the United States’ tower density lags China by approximately three times. The United States has 4.7 sites compared to China’s 14.1 sites per 10,000 people.

This matters because 5G’s speed and coverage capabilities rely on the addition of towers and small cells to the network, the report notes: “5G standards provide for less spectral efficiency gains than previous generations of network technology. Instead, improved speed and capacity stem from the ability to utilize large blocks of contiguous spectrum and higher frequencies.”

It’s clear what the US stands to gain from 5G investments: “Being first to LTE afforded the United States macroeconomic benefits as it became a test bed for innovative mobile, social, and streaming applications,” the report says.

New app trends that will help businesses succeed in 2020