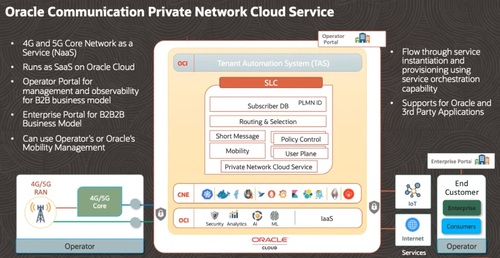 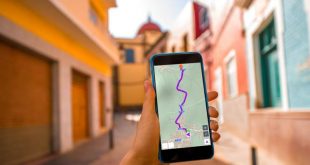 Oracle said it plans to sell 4G and 5G core network services to mobile operators starting later this year. The company said the offering would run inside Oracle’s cloud and would be available “as a service,” meaning operators will be able to pay only for what they need on a recurring basis.

“5G was actually developed as a web-based application,” Oracle’s Travis Russell explained during a recent Competitive Carriers Association (CCA) webinar on the topic. The event was targeted at CCA members, which are primarily small and regional wireless network operators in the US.

“Because 5G is built in the cloud, it’s a perfect candidate for a SaaS,” the software-as-a-service model, Russell said, explaining that operators will no longer have to purchase equipment under the “Mother’s Day rule” whereby they must invest in enough equipment to handle their biggest traffic days. Instead, with SaaS, they can scale up and down as needed, paying only for what they use.

“We are the only 5G supplier that is also one of the largest cloud suppliers in the world,” he boasted, noting that although companies like Microsoft and Amazon are increasingly selling telecom services via partnerships, Oracle provides much of its own telecom offerings in-house. “We’re our own supply chain, we build our own hardware, we build our own chipsets.”

Oracle is boasting of a flexible 5G core strategy. Click here for a larger version of this image.
(Source: Oracle)

“Expect to hear a lot about how we’re growing this out,” Russell said, pointing to Oracle’s announcement last year that it would provide 5G Policy Control Function (PCF) for KT in South Korea.

Crowded core
Oracle’s entry into the 5G core market comes as little surprise. The company has long had a presence in the telecom market, most notably via its acquisitions of Tekelec and Acme Packet in 2013. Russell said Oracle has been working on 5G for the past four to five years.

But Oracle isn’t alone in chasing the 5G core opportunity. For example, HPE recently threw its own hat into the 5G core marketplace, as did Microsoft via its acquisitions of Affirmed Networks and Metaswitch Networks. Established vendors in the space include Cisco, Ericsson, Huawei, Mavenir, Nokia and ZTE.

The reason for all the interest in the 5G core is a matter of timing. Today’s early versions of 5G primarily rely on 4G cores because the “standalone” (SA) version of 5G wasn’t ready yet. But now that 5G SA specifications are ready for prime time, a number of operators – including all of the major operators in the US – are planning to deploy 5G SA cores in the next year or so. Doing so will provide them with much more flexibility than they have today using the “non-standalone” (NSA) version of 5G.

This transition is a major opportunity for vendors. For example, China Mobile – the world’s largest mobile operator in terms of customers – recently awarded 5G core contracts totaling $1.3 billion to Huawei, ZTE and Ericsson. Research and consulting firm Dell’Oro reported that the Mobile Core Network (MCN) market grew to $8 billion in 2019.

“There are a lot of people with 5G core ambitions right now,” he explained. “It is hard to know who will be successful. Over time, as we know, Ericsson, Huawei, Nokia, and ZTE are hard to beat.”

Indeed, Bolan wrote in a recent Dell’Oro post that Huawei and Ericsson are the top two wireless packet core suppliers with a combined 60% of the market. And he noted that both already have plenty of momentum in 5G.

Bolan also said that Oracle may need to ink partnerships to flesh out its core offering – that’s exactly what HPE has done for its own core play.

That’s partly because the 5G core – the brain of a 5G network – will need to be able to handle a massive array of features and functions in the months and years to come. Everything from Network Slicing Selection Function (NSSF) to Multi-access Edge Computing (MEC) to Time Sensitive Networking (TSN) is handled by the core. And those are the kinds of services that operators are hoping will ultimately make 5G profitable.

“Time will tell how this will play out,” Bolan concluded. “And for sure the cloud service providers [like Oracle] want to be players. It will be interesting to see which strategy or strategies will be the winner(s).”