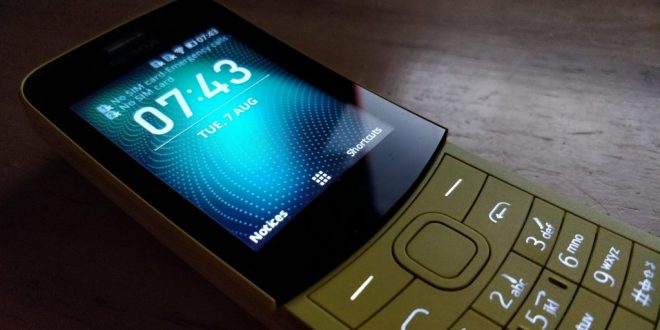 Remember the days when Nokia ruled the roost and were the phone to have? The Nokia 8110 made its first appearance in the original Matrix movie and this last couple of weeks I’ve been travelling down nostalgia lane with the 2018 update to this classic phone.

I’ll be brutal for a moment here: by current market standards, the hardware on the 2018 refresh of the 8810 is not great, in fact it would probably be considered by most as a low end phone at best. Much like the 3310 that Chris had a look at late last year; that’s not the point.

The 2.4” TFT display running 240 x 320 at 167ppi is enough to see necessary details such as caller ID, calendar appointments and the required detail for a good game of snake but lacks the physical size and resolution for other more complex display needs such as video playback.

While the screen is a bit lacking in size, the phone is physically very small by today’s standards (133.5 x 49.3 x 14.9 mm size), offers dual SIM capabilities and has a battery (1500mAh) that has lasted me over 10 days without needing a recharge. This all gives it some reasonably good footing to take the mantle as a secondary or “backup” phone for many users.

As a backup phone you’re not going to be looking to this for photography needs and that’s a good thing: the camera is a 2MP camera that produces pretty grainy photos with somewhat washed out colour. Disappointing results, but not unexpected given the general specs and targeted audience for this device.

The processing specs are low end as well starting with a dual core 1.4Ghz Cortex CPU, 4GB internal storage (that’s not a typo, storage…) and a minuscule 512MB RAM. All of this adds up to the earlier mentioned huge battery life enclosed in the IP52 (drip protection) rated body.

As you would imagine, on a phone like this that has been updated and contextualised to today’s market – the menu system and software functions are very simple.

Covering the most important item first: Yes, it has Snake! For the record, yes I spent far too long playing it and thoroughly enjoyed my time doing so.

Getting back to what the phone is actually about – the call functions, logging, calendar and message handling is reminiscent of the old school Nokia phones with a simple contacts list which can be synced with your Google account easily.

In terms of the modern options on the phone you’ll find the browser, email, YouTube, Google Maps and Google Assistant quite clunky to use, requiring T9 input for your searching which unfortunately removes much of the convenience of the functions. The app store has some very low end options: a few basic games, a weather utility and a basic twitter app.

What it does well

This is a really good phone if you’re looking for great battery life, as a backup phone or just if you’re needing to make and/or receive lots of calls throughout the day. I’m seriously considering grabbing one, charging it once a week and just using it in case of emergency.

I liked having the FM radio built in as I often will sit and listen to the radio but don’t want to chew through huge amounts of data to do so, making this a really nice to have addition and adding some value to the phone.

What’s it not so good at?

Being brutal for a moment, the 8810 isn’t good at any “smart phone” functionality. The fact remains that the phone is a button based input and our requirements and expectations from devices has progressed so far past this that as a primary device, the vast majority of users simply won’t be happy with it.

The 8810 is a really simple phone and a great bit of nostalgia. When all considered, not a bad phone but it’s not brilliant by today’s standards. It lacks screen real-estate, it lacks grunt, it lacks software functionality, text messaging is painful (you really have to work for it!) and it lacks app compatibility. For a user looking for a current phone as a daily driver, this isn’t for you.

If you’re looking for a second phone, with battery life that takes you back to when you felt inconvenienced by actually having to charge your phone, then this is a phone you should really be looking closely at. The convenience of being able to sync your Google contacts is a massive bonus as it means no duplication of this data.

I’ve found that the mobile signal is really solid in both metro centres as well as fringe area’s and it’s got dual SIM so there is some functionality that many of the current breed of phones lack.

At the end of the day it’s currently $136.99 from Expansys and will well and truly meet the expectations of the price tag.

If you were looking at a device of this price point, what would be your must have options?

User Rating: Be the first one !

More than a million Cubans connect to Internet through 4G – OnCubaNews