Since launching the SLA for Microsoft Teams has been 99.9% uptime, today Microsoft updated their Service Level Agreements (SLA) for Online Services to change that to 99.99% uptime, but specifically for Calling Plans, Phone System and Audio Conferencing.

The Teams service is actually covered by 3 SLAs:

Calling Plans, Phone System, and Audio Conferencing has been modified in this SLA update, previously it only covered Calling Plans and PSTN Audio Conferencing, but now covers Phone System too. This means it also covers the Microsoft elements of Direct Routing and logically the Microsoft elements of operator connect. It also covers “calls with Call Queues or Auto Attendant” These were not previously mentioned. In both those cases, Microsoft specifically does not take responsibility for third parties: “This SLA does not apply to outages caused by any failure of third-party software, equipment, or services that are not controlled by Microsoft, or Microsoft software that is not being run by Microsoft itself as part of the Service.”

If customers also have direct routing or operator connect, they will have to consider the SLA of their operator to get a complete picture of the SLA for their users.

Interestingly while the Calling Plans, Phone System, and Audio Conferencing SLA went to 99.99%, the core service SLA and Voice quality SLA remain at 99.9%.  Which is up to 43 minutes 49.7 seconds of downtime per month before it’s breached. This is in line with most of the other Office 365 services that also offer a 99.9% SLA.

The Service level agreement offers service credits if Microsoft falls below its SLA.

Service Credits are your sole and exclusive remedy for any performance or availability issues for any Service under the Microsoft Agreement and SLA. The Service Credits awarded in any billing month for a particular Service or Service Resource will not, under any circumstance, exceed your monthly service fees for that Service or Service Resource, as applicable, in the billing month.

The agreement is publicly accessible from Microsoft here. You should reference this document as authoritative and not my blog. I’m not a lawyer and the agreement is between Microsoft and the customer, but here is a breakdown of the key points.

How is uptime calculated?

Where Downtime is measured in user minutes for each month,

Downtime is defined as any period of time where users cannot access the relevant services.

Downtime is the sum of the length (in minutes) of each Incident that occurs during that month multiplied by the number of users impacted by that Incident.

The number of users impacted is important. if not all users are impacted, it’s only a multiple of the minutes of the users that are impacted.

This SLA applies to any eligible call placed by any voice service user within the subscription (enabled for making any type of call VOIP or PSTN).

“Eligible Call” is a Microsoft Teams placed call (within a subscription) that meets both conditions below:

· Packet Loss, Jitter, and Latency issues on the call were due to networks managed by Microsoft.

“Total Calls” is the total number of Eligible Calls

“Poor Quality Calls” is the total number of Eligible Calls that are classified as poor based on numerous factors that could impact call quality in the networks managed by Microsoft. While the current Poor Call classifier is built primarily on network parameters like RTT (Roundtrip Time), Packet Loss Rate, Jitter, and Packet Loss-Delay Concealment Factors, it is dynamic and continually updated based on new learnings from analysis using millions of Skype, Skype for Business, and Microsoft Teams calls and evolution of Devices, Algorithms, and end-user ratings.

How would I claim credits if I was impacted by a service issue?

Will Microsoft notify me of issues?

Service incident updates are provided on an hourly cadence or, if a different cadence is required, it will be stated in the SHD communication posting.

Microsoft doesn’t report on Microsoft Teams uptimes specifically or break out any Office 365 service uptimes. However, they do report publicly on Office 365 uptime as a whole here. 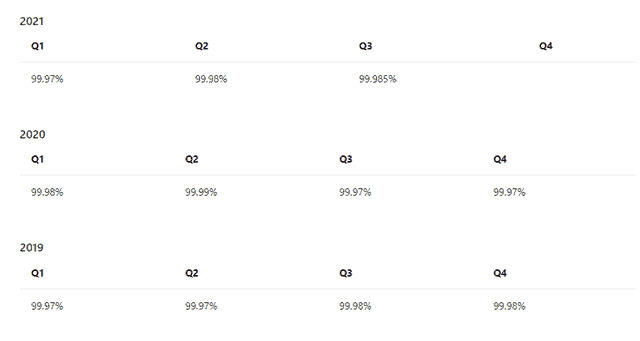 Of course, this is for the whole of Office 365, so it’s calculating the minutes of downtime for all the Office 365 users and since Office 365 is comprised of lots of individual services, any single service could go below these averages and have no real impact on the overall Office 365 global uptime percentage. Individual customers may experience higher or lower uptime percentages compared to the global uptime numbers depending on location and usage patterns. 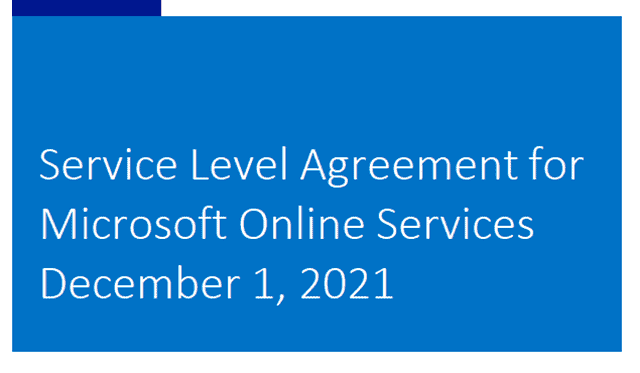