Getting ready for the Uncarrier's big second act – Light Reading 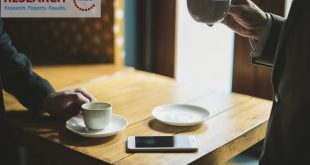 T-Mobile – which during the past few years has completed an incredible corporate turnaround under its “Uncarrier” brand – is likely just days away from closing its mega-merger with Sprint.

The merger is itself an impressive achievement considering some analysts gave the deal long odds when it was first announced almost two years ago. Fast forward to today, though, and most of the company’s merger puzzle pieces have finally fallen into place: It has financial backing from more than a dozen banks; it has assembled a complete leadership team for the combined company; it has regulatory approval from virtually every federal and state agency across the country; and it has even already launched some of the services it promised to offer after the merger.

If T-Mobile’s long-awaited union with Sprint finally, officially closes on April 1 – as the company has promised – the industry will soon get its first real look at the Uncarrier’s big second act. Coronavirus or not.

This is important because – based on T-Mobile’s past performance and coupled with the valuable Sprint assets it will gain – the company’s second act is probably going to be a blockbuster.

The network
The most obvious and tangible element in T-Mobile’s merger with Sprint is the network that will emerge from the deal. In terms of mechanics, T-Mobile has promised to spend $40 billion over three years in part to shutter 35,000 redundant cell towers around the country and build 10,000 new towers, leaving the combined company with 85,000 towers. Concurrently, the company plans to grow its small cell count from a combined 10,000 today to a total of 50,000 over the coming years. The company has promised that all that work will result in “the world’s best 5G network.”

More importantly, T-Mobile’s new network will combine an incredible portfolio of spectrum assets, including T-Mobile’s nationwide lowband 600MHz licenses and Sprint’s nationwide midband 2.5GHz licenses. Those licenses essentially form two of the three layers of the fabled 5G “layer cake,” leaving only the highband layer for the carrier to deploy in the years to come.

T-Mobile for years has touted the “layer cake” of 5G – including lowband, midband and highband spectrum – as essential for a robust network.
(Source: T-Mobile)

But even more important, the 5G “cake” that T-Mobile plans to bake via its Sprint merger will be dramatically larger than the cakes available from rivals AT&T and Verizon.

“T-Mobile will have the premier spectrum portfolio in the wireless space with over 300MHz of low- and midband spectrum (vs. AT&T at 176MHz and Verizon at 117MHz),” wrote the analysts at Wall Street research firm Wells Fargo in a recent note to investors. 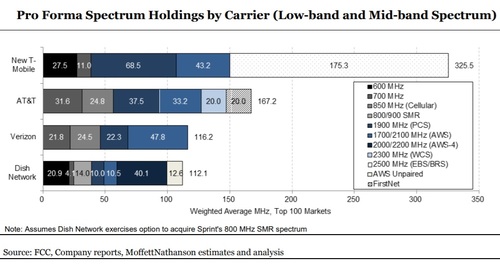 The Wall Street analysts at MoffettNathanson offered a look at the spectrum portfolio of a combined Sprint and T-Mobile, in terms of midband and lowband licenses, when compared with the spectrum owned by Verizon and AT&T. Click here for a larger version of this image.
(Source: MoffettNathanson)

To be clear, the above chart doesn’t include the highband, millimeter wave (mmWave) spectrum that Verizon and others are using for 5G. Verizon, in particular, is doubling down on mmWave 5G as it awaits an FCC auction of C-Band midband spectrum for 5G.

Further, a wide range of phones currently sold by Sprint and T-Mobile can support both 600MHz and 2.5GHz, meaning New T-Mobile can remotely update those phones to connect them to a merged network at some point in the future.

The reason New T-Mobile’s vast spectrum holdings are important is because it will give the carrier much more network capacity than its rivals. Meaning, the company will be able to put more stuff onto its network, and potentially charge much less for that traffic, than AT&T and Verizon.

“New T-Mobile really does appear poised to have a genuinely advantaged network,” wrote the analysts at MoffettNathanson. “What is remarkable, however, is not so much that T-Mobile is well positioned here, but that Verizon and AT&T are not.”

“New T-Mobile will have a little more than 50% of the industry’s capacity, when the deal closes – almost double AT&T and almost triple Verizon and Dish. They will have just 27% of the industry’s service revenue,” wrote the Wall Street analysts at New Street Research in a recent note to investors. They said this all means New T-Mobile has room to grow.

The services
So what will New T-Mobile do with all that extra network capacity? First, it’s going to undercut AT&T and Verizon in terms of price. In fact, it already has: In response to the coronavirus, the company is now offering unlimited talk and text plus 2GB of 5G data for $15 per month, an offering it had initially promised to launch after the close of its Sprint merger.

But T-Mobile has also promised to open a major new business initiative that will leverage its excess network capacity to challenge the nation’s cable operators on their home turf. Specifically, T-Mobile has said it plans to use 5G to provide in-home broadband Internet connections at speeds up to 500Mbit/s across 10 million US households by 2024, covering 52% of all US zip codes.

The analysts at MoffettNathanson argued that fixed wireless services from T-Mobile and others could well be the “most important threat” that cable operators face in the future. However, they cautioned that the contours of the threat are still coming into focus, considering Verizon’s mmWave fixed wireless play is still developing and other efforts, such as low-Earth orbit (LEO) satellite offerings, are still being deployed.

But the big question is: What else might be up T-Mobile’s sleeve?

“Being a disruptor takes courage, time and capital,” wrote the analysts at New Street Research.

That said, T-Mobile certainly has experience in this arena. CEO John Legere and his team in a few short years took an operator in a distant fourth place with no real 4G network and – through a highly successful Uncarrier rebranding and the introduction of several high-profile services (which have since been mimicked by the rest of the nation’s operators) – completely changed the company’s direction. T-Mobile is now widely hailed as a leader in the global wireless industry and remains a top pick among Wall Street telecom analysts.

“T-Mobile is now, in our view, the most compelling investment opportunity in our coverage universe,” wrote the analysts at MoffettNathanson in a recent investor report.

And even though Legere is set to depart the company this year, many expect New T-Mobile’s incoming leadership team to maintain, and expand, the operator’s Uncarrier positioning. It’s also reasonable to assume that they will lay out their plans – including potentially additional Uncarrier-style announcements – during a press briefing to announce the closing of T-Mobile’s merger with Sprint.

Whether a TV service is included in those plans – given T-Mobile’s missteps around its Layer3 TV acquisition – remains to be seen.

“The pay-off could be much greater this time around,” wrote the analysts at New Street of T-Mobile’s future following its merger with Sprint.

Ramifications
Of course, any discussion about the future of New T-Mobile must include the shadows cast by the coronavirus. It’s still unclear how cloudy it’s going to get – already some analysts have predicted a 45% decline in carriers’ quarterly customer additions due to the virus. On the other hand, many see the telecom industry in general, and New T-Mobile specifically, as somewhat insulated from the worst of the COVID-19 fallout.

Looking further into the future, though, it’s not clear how a merged T-Mobile and Sprint might impact the wider telecommunications market. Importantly, some have theorized that the merger will bring about closer ties between the wireless industry and the cable industry. But whether that involves some kind of network-sharing agreement or a more straightforward transaction between the likes of New T-Mobile and Comcast or Charter Communications remains to be seen.

Finally, the analysts at New Street offered some speculation around the mergers and acquisitions that could fall into place following the unique precedent set by a successful close of the Sprint and T-Mobile transaction. That’s because the merger combined the nation’s third and fourth largest wireless network operators in a clear challenge to established antitrust guidelines. The fact that the US Department of Justice’s antitrust division signed off on the deal potentially opens the door to similar apples-to-apples mergers. The analysts at New Street speculated on three potential combinations: