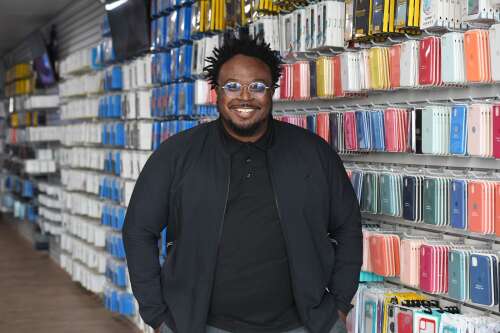 Kenny Pemberton of Gear & Gadget has a knack for sourcing hard to find tech items.

Take the Sony PlayStation 5. If you try to buy it online, you’ll most likely find the note: Currently unavailable. The gaming system is highly sought after, right now.

Mr Pemberton is expecting 20 of them in the next couple of weeks.

“I go to the other side the world for them,” he said. “I got my first batch from Japan. I got the batch coming from Hong Kong.”

He already has a long list of customers looking for the items.

Gear & Gadget moved to 30 Queen Street, Hamilton earlier this month, after eight years in the Washington Mall. He now has triple the floor space for his gizmos – electric bikes, electronic toothbrushes, phone cases, LED ring lights and more. There is also more space to repair mobile phones and screens.

“We started as a mobile device store,” Mr Pemberton said, “but we have evolved more into a lifestyle company.“

“They say they feel like they are away,” Mr Pemberton said. “They feel like it is a different place than it was.”

The pandemic brought Mr Pemberton new challenges as an entrepreneur. In 2020, he received his last shipment of goods on March 18, just before Bermuda went into lockdown.

“Nobody had any answers at that time,” he said.

After three weeks of anxious waiting, he decided to make things happen. He had stock. If he was going to stay in business he had to try to sell out of what he had. He created a website and started offering kerbside delivery.

When restrictions started lifting, mobile phones flew off the shelves.

“After 70 days at home, some people had devices that were broken or screens that were cracked,,” he said “People did not realise that my business was an essential business because I was getting phone calls every day, all day, saying can you fix my phone, or I got my kids birthday tomorrow and I need something for them.”

When he reopened, traffic into the store was slow, but he felt that something was better than nothing.

“The loss of seventy days of income did not help at all,” he said. “So we decided to press on. I always order in abundance. I know what we sell the most of.”

But importing goods was challenging.

“I had a box sit in China for 40 days, waiting to get on the plane,” he said. “We had to figure out how to get around those nuisances. I had enough stock to carry me through that segue.”

He said in their previous space, they were only able to have five people in the store, but people disobeyed the signs and crowd control was difficult.

“We did what we could and everyone stayed safe,” he said.

Things are easier in that regard, now that he has a larger store.

Mr Pemberton plans to offer workshops in the latest applications in the coming months.

“We will have small, intimate classes of ten people or less,” he said. “I do not want to do it virtually, because I think some of these concepts are hands-on and easier to teach in person.”