Combining all things Microsoft – Windows 10, Microsoft Teams, Office 365, Microsoft Whiteboard, Skype for Business integration and the Azure cloud – the range sees the new device weighing 40% lighter than its predecessor, with a 60% thinner display, according to Redmond.

The initial 50-inch multi-touch display is 4K capable and Microsoft days it offers “the best pen and touch experience and the highest resolution compared to any device in its class”. It also delivers 50% faster graphics performance than the original Surface Hub.

A degree of battery-enabled mobility is possible, as an alternative to mains power (when paired with the separate Steelcase Roam Mobile Stand and APC Charge Mobile Battery, pictured above). Speakers and far-field mic arrays are part of the package, too.

It’s expected that the 50-inch Surface Hub 2S will start shipping in the U.S. in June and will be priced at $8,999 coming to additional Surface Hub markets “shortly thereafter”.

A rather important disclaimer is needed at this point, however. Microsoft flags that the Surface Hub 2S is still yet to be authorised under U.S. Federal Communications Commission (FCC) rules. This means actual availability is still contingent on compliance with FCC requirements… 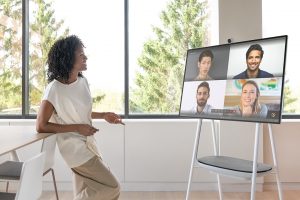 “Surface Hub 2S gives teams the flexibility to come together wherever they work best. It takes something that has long been a fixture in the conference room – the shared screen – and transforms it into a mobile computer, built for teams. Surface Hub 2S offers the thinnest edge and smallest bezels in its class, bringing you closer to your content and your team and integrating seamlessly into any office environment.”

“When paired with the Steelcase Roam Mobile Stand and APC Charge Mobile Battery, Surface Hub 2S creates a mobile collaboration experience that frees teams from the conference room and allows your ideas to be as mobile as you are – no AC power connectivity required.”

The 85-inch version will come later. He adds:

“Later this year, we will also offer Surface Hub 2 Display, for spaces that need a great pen and touch enabled interactive display, without the compute, as well as a new configuration option for Surface Hub 2S customers to run Windows 10 Pro or Enterprise on their devices for specialised app scenarios. We’re also excited to announce that we’re adding an 85-inch version to the Surface Hub family. We will begin testing Surface Hub 2S 85-inch with select customers in early 2020.”

You can see a recording of the full Microsoft launch event in New York:

Microsoft seems to be rebounding as a company, after the Ballmer doldrums. At the time of writing, following its Q3 financial results (which included Surface revenue growing 21% y-o-y, up to $1.3bn) it has just overtaken Apple to be the most valuable technology company in the world, in terms of share price valuation. The company is officially worth $1 trillion dollars…

Gadgets: Bring a Gorilla to your next meeting

Did you know continuous use of gadgets harms skin? Here are some expert approved home remedies