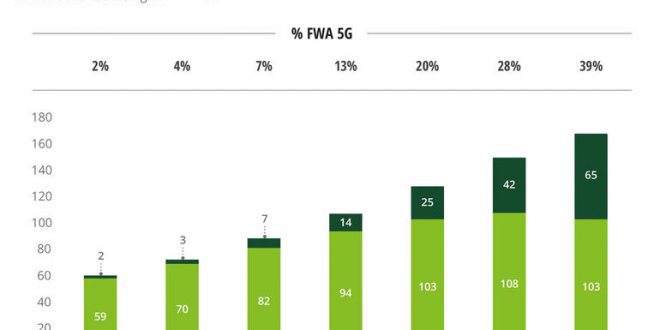 5G only makes up a small percentage of those connections now, but a CAGR of 88% by 2026 means it’ll be the big driver of FWA’s growth, says Deloitte.

Deloitte is predicting a big 2022 for fixed wireless access service (FWA), which uses cellular data signals to deliver broadband internet to homes and businesses, and expects the number of FWA connections to grow from the 60 million recorded in 2020 to 82 million over the course of next year.

Interestingly enough, 5G fixed wireless access, which one would assume accounted for most modern FWA connections, only makes up four percent of such connections in 2021, and will make up seven percent by 2022. That’s a small percentage, but looking ahead to 2026 it becomes clear where the growth is happening: It’s all 5G.

“While our analysis reveals a 19% compound annual growth rate between 2020 and 2026 in total for FWA connections, 5G FWA connections will grow even faster, at a CAGR of almost 88% over the same period,” Deloitte said in a release.

5G isn’t the only driver of FWA growth

Looking at the graph of FWA growth between 2020 and 2026 that Deloitte provided, you can see how 4G and other technologies levels off and begins to drop by 2025, at which point 5G starts to not only grow, but also truly creep into the territory held by older connections.

The reason for that growth is undoubtedly 5G, but Deloitte describes a “confluence of factors” all finally coming together to make FWA more than a niche technology. “Many operators have deployed FWA selectively for decades to offer customers internet service … to date, FWA has not achieved widespread operator adoption outside of a few countries such as Austria or Finland,” Deloitte said.

The programs that governments have set up to increase broadband access to rural and underserved areas have typically favored wired solutions, Deloitte said, but have recently started becoming technology agnostic, provided the service can meet minimum performance thresholds.

Deloitte also mentioned DSL service, which is ripe for replacement by 5G FWA. It cited unnamed operators in the U.S., Italy and Switzerland as having “explicit plans to use 5G FWA along with fiber to upgrade and replace existing DSL connections, which reduces costs by decommissioning legacy copper networks.”

Based on Deloitte’s data, it also seems that FWA is being seen as a leading use case for 5G. Of the providers that have launched 5G service, 90% are offering 5G FWA, Deloitte said, adding that only 62% of providers without 5G service offer FWA.

The industries affected by WFA growth

Growth in 5G and FWA will have an effect on several different industries, Deloitte said. Some, like network operators, are obviously affected by increased incremental revenue and a new set of potential customers. Other industries, like cable companies who’ve dominated home internet since the inception of broadband, could see revenue loss to mobile network operators offering FWA packaged with cellular plans.

Outside of network operators, network equipment manufacturers stand to gain a lot, too. Deloitte cites the fact that 5G conforms to industry standards like 3GPP, meaning that OEMs have a chance to work together to create interoperable equipment.

The growth in 5G FWA that Deloitte is predicting is going to be a key component of broadening availability while at the same time providing new revenue streams, areas for growth and innovation opportunities for both telecoms and OEMs alike. That’s a win-win for everyone, Deloitte said.

0Shares
0 0 0
Previous What Is a Softphone and Why Should You Use One? – business.com – Business.com
Next Sayollo announces launch of gComm, a mobile game commerce platform – VentureBeat